D.I.Kim Stone had become part of my life sometime back. After the tragic and heart breaking climax of book#8, I wanted to know how Kim and her team moved ahead? So, was eagerly waiting for this book. After the last case, Kim Stone’s small team was moved to various stations to handle different things. Now, they regroup to catch a serial killer.

They have got Kev Dawson’s replacement, but Kim isn’t willing to accept his replacement Penn. With each book, we get to Kim Stone and her team members: Byrant and Stacy better. Especially, Kim, who thinks she is personally responsible for Dawson’s death, retreating into her shell like a tortoise, boxing the things that bother her much. Kim doesn’t even open with her best friend at work Bryant.

Though Kim has returned to work after the surgery, her boss Woody wants to know if she mentally fit for re-joining work? Ted’s analysis of Kim towards the end and even Byrant’s chat with Kim are well done. I had to re-read those parts as they were best parts of this book. Angela Marsons happens one of the best crime writers of our time. This one is the best longest series I have read so far. Still it is as good as any book in this series. I highly recommend this series to those who like suspense and nail biting thrillers. 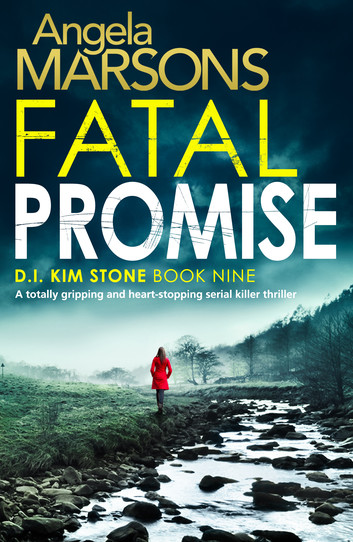 The plot is different and unique of a middle aged couple Priyamvada Kaushik (Neena Gupta) and Jeetender Kaushik (Gajraj Rao) who get unexpectedly pregnant. The problem is that they have a marriable son Nakul (Ayushmann Khurrana) and second son Gullar (Shardul Rana) who is giving his board exams. Above all, the father Jitu is nearing retirement.

The best thing about this movie is focus on the romantic side of middle aged couple Priyamvada Kaushik (Neena Gupta) and Jeetender Kaushik (Gajraj Rao) rather than son Nakul (Ayushmann Khurrana) and his love interest Reene (Sanya Malhotra). The situational comedy works very well and keeps one entertained from start to finish. Though the climax will make one feel emotional.

Surekha Sikri, who plays the dadi, gives good support to the lead actors. Though she is old fashioned, but she is too good when speaking about her bahu with a baby bump. Badhaai Ho promises a novel experience, with good tracks like Badhaiyaan Tenu’, ‘Naina Na Jodeen’ and ‘Sajan Bade Senti’ which fit in the movie perfectly. Though the plot is pretty simple, but the writing is detailed. Everyone have performed well. My rating is 4/5. Highly recommended.

What is life? It runs on liver. Wow! I haven’t seen a brilliant thriller in Hindi movies for quite sometime. This one is surely the best nail biting or edge of seat thrillers of this year. It is difficult to make a thriller as audience have seen better suspense movies in their lives and they can judge how the next scene would be like.Sriram Raghavan, the director of this movie knows how to bring out the rabbit out of the magician’s hat in a different way! Akash (Ayushmann Khurrana) the leading man of the movie is just brilliant in this role of a blind man.

Akash, a piano player, was not born blind but tells us he lost his eyesight when struck by a cricket ball at the age of fourteen. Tabu is perfect playing the woman without a conscience. You can’t predict what is going to happen next ? The suspense isn’t whether Akash is blind or not? It is much more than that! Andhadhun is a rare thriller to Bollywood which is starved of good movies like this one.

The writing and execution of the characters is outstanding. A policeman, played by a hilarious Manav Vij, eats sixteen eggs a day “for protein,” fears his wife and, despite his beefy body, is a chicken at home, though he is called ‘Singham’ by his lover Tabu. Tabu’s character is extraordinary, nothing like that she has played before. Radhika Apte is good in her role. Sriram Raghvan has delivered what seems like an impossible thriller. My rating is 5/5. Highly recommended! 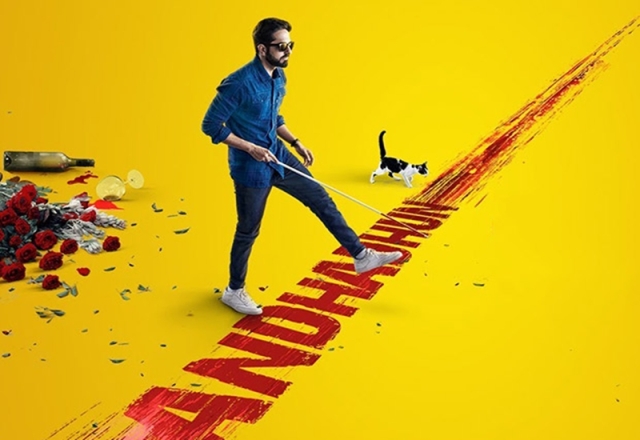 Two reasons why I wanted to watch this one: I hadn’t watched a movie in theatres for quite sometime and this one got good reviews. Also it is produced by Anand L Rai, who has directed some pretty good movies like Tanu Weds Manu and its wonderful sequel. However, this one isn’t for everyone and it is slow paced and has gore, dark and deep, above all not your usual popcorn movie. It is set in pre and post independence periods which makes it feel more authentic. Technically, the movie is very good. Especially, visuals and the way Tumbadd is shown onscreen, Pankaj Kumar’s cinematography gives the movie a great effect . The BGM is well supported with the setting and visuals to give it an eerie feel. It is the fear of the unseen legend and mythical creature called Hastar, which is well supported by human greed that sets the tone of the movie. Sohum Shah who plays adult Vinayak is brilliant, has dedicated seven years of his life for this movie. All actors in the movie have done good job. Tumbbad is the story of a boy who grows up obsessed with the mythical treasure. As he grows up, he finds a way to get it, coin by coin, going deep and deeper into the forbidden abyss. Vinayak gets addicted to narrow escapes and keeps going back to the abyss for more, which goes on for over thirty years. The film is presented in chapters and the final chapter concludes post independence. It ends up as a moral tale on human greed, which can be more scary than any supernatural entity. I am reducing half a star for making me feel sleepy while watching it. Especially, the first part before the interval. My rating is 3.5/5. Recommended if you want to see something different in horror genre and if you could sit through its slow pace. 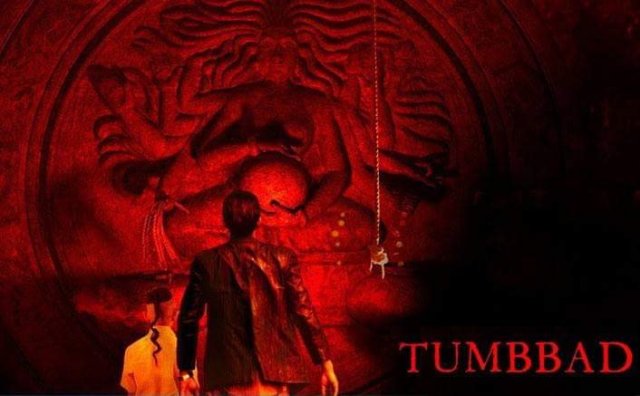 This one has an unconventional story line introducing Dulquer Salman to Bollywood, who is well supported by Irrfan Khan and Mithila Palkar. Most of us don’t follow our dreams/passions in our individual lives as reality is different from fantasy. It is same with Avinash (Dulquer) who wants to be a photographer, but his father demotivates him and he lets go of his dream. This adds to the gap between father and son. Then suddenly, son comes to know that his father had passed away in an accident which occurred while he was on a pilgrimage. To make matters worse his father’s body gets exchanged and goes to Kochi.

This starts a wonderful journey for Dulquer with his friend Irrfan Kahn who owns a Kaarwan, on the way they pick up Mithila in picturesque Ooty, then they go to deliver a parcel somewhere in Kerala. The cinematography is wonderful capturing all these beautiful places in camera’s lens. So is the wonderful music of the movie. The movie is dull at some places and enjoyable at other parts.

Overall, it ends up being a feel good movie. The best scene according to me is when the son speaks about his dead father in the prayer ceremony. It was really touching and Dulquer brings out his best in that scene. Amala is sweet and nice in a small role as Mithila’s mother. Even Kirti Karbanda appears good in a tiny role. Kaarwan might not be Dil Chaahta Hai or Piku, but still it is enjoyable and leaves you with a nice feeling towards the end. My rating is 3.5/5 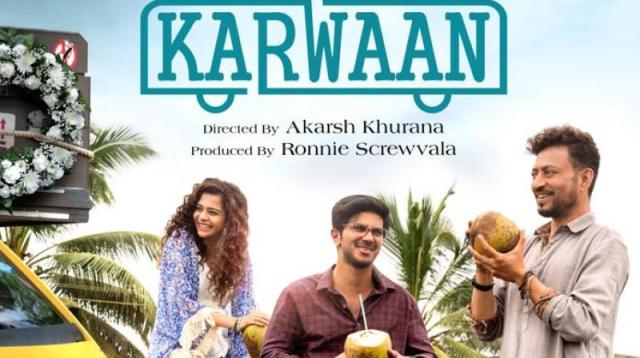 Kolamavu Kokila aka COCO is a heroine centric movie which tells the story of a lower middle class family that struggles to make ends meet, things take a turn when Kokila’s mother is diagnosed with disease and they need lot of money for her treatment. Nayantara is spot on for the character which is perfect example of “Looks can be deceptive”. She plays innocent girl next door to the perfection. I have seen many dark comedies in Tamil.

This one might not be the best one amongst them, but still it holds its ground and is good one time watch. However, the situation comedy with serious back drop doesn’t really click like it did in other movies.

The only funny thing I felt was Yogi Babu trying to impress his love interest Kokila. Saranya as usual was good as Kokila’s mother, but I feel she is some what type cast with such roles. Music by Anirudh is a major plus point. Nayantara is as usual gives her best in this movie as well. My rating is 3/5. 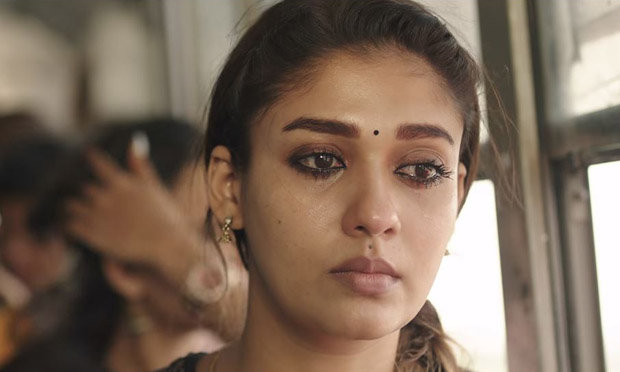 I have seen quite a few horror movies based on the Ouija board. Some were good and some not so good. This Spanish supernatural horror drama film directed by Paco Plaza based on a true incident from the 1991 Vallecas case where Estefanía Gutiérrez Lázaro died mysteriously after she used a Ouija board. Though this one isn’t spectacular, but it is still watchable.

The plot is about a 15 year old Veronica living with her mother and three younger siblings. As her mother works extra hours to support the family, Veronica takes up the responsibility of her siblings.

At school, she along with her other two friends perform a séance using a Ouija board to speak to her long gone dad. An evil spirit enters Veronica’s life and things go bad from then on, until the inevitable climax. The movie isn’t as scary as it claims to be. I liked the girl who played Veronica, felt she was cute and beautiful. Also she delivers a good performance This is one time watch and was first movie I saw on Netflix. My rating is 2.5/5. 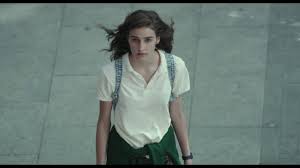 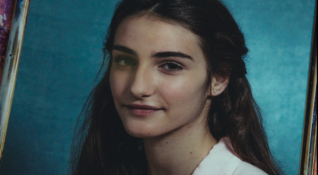 I thank my fellow wordpress blogger Markd60 for recommending this wonderful series. This is the second series I had seen on Netflix after Stranger Things, the only similarity between both series is missing kids concept. However, the presentation is different. I would watch any language with English sub titles, provided it holds my interest. Well, this German TV series did hold my interest from start to finish! It took one Saturday to complete the season.

This one might not be fresh and innovative in terms of time travel concept, but it surely is in its story idea and execution. The complexity of the story can be compared with layers of an onion. It is multi layered and includes three time zones : 2019, 1986 and 1953; each separated by a gap of 33 years. ‘Dark’ is slow paced in the beginning, but it keeps you on the edge of your seat. It is tense, the cinematography and acting is great. It has more depth in characterization than Stranger things. Again, I was tempted to complete the season before going to sleep at 5 am. The best thing is almost perfect matching of characters in different ages.

This one is dark and compelling, not for everyone. It has nudity, sex and language, if that is okay then I would highly recommend this series. I feel like seeing it once again. My rating is 4.5/5.