Recently, I felt like trying Netflix and the first thing I saw was ‘Stranger Things’ two seasons one weekend. It was so interesting that I completed two seasons in two days. It literally took me back to the 80’s like travelling in a time machine, that feeling made me feel nostalgic as my childhood belonged there! When a young boy named Will Byers goes missing, his friends, mother and the town goes in search of him. Meantime, a strange girl enters the town and she is called “Eleven”.

Though the CGI wasn’t up to the mark at times, everything else made up for it. Including the performances of the kids in this series. I felt the chief cop was cool too. I felt sorry for Bob in season 2. It was as Steven Spielberg and Stephen King, the king of horror and supernatural came together and made this series. Well, not to forget James Cameron as well.

What really worked most in this series, especially the season was the element of suspense that made it more engrossing, just like a mystery or suspense novel which you don’t feel like keeping down until you complete it. And yes, it did remind me my fav series of all times : The X-files. I heard season 3 is being made. Hope it is as good as season 1 & 2. My rating is 4.5/5. Recommended, if you haven’t seen it yet.

This movie is based on a play of 20 minutes with the same name and should say that it is brilliant adaptation to big screen! The writing is simply superb and so is the execution by the director. Though the movie has minimum characters, they all have contributed in a big way. Especially, the lead actors are from Big Boss. It suits the saying very well “Land can provide for man, but not for his greed!”. 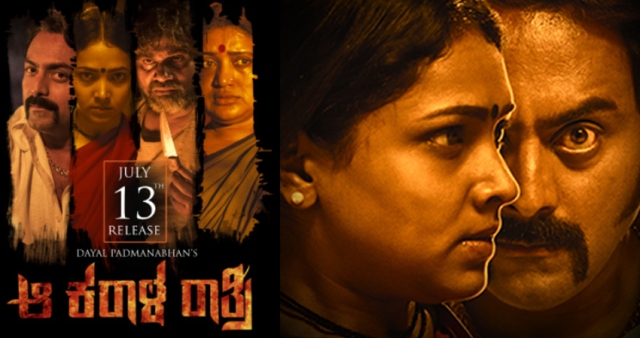 This suspense thriller is short and effective and keeps the audience on edge of their seats. The twist in the end and the climax will leave one dumb struck. Not just that, the movie will linger on your mind for days. Technically, the movie is very good, but the same can’t be said about its songs. They could have been better.

It is simple rural language with a few unheard lines from Mankuthimmana Kagga (poems by DV Gundappa), makes it even more interesting. Almost gives a poetic feel. This one is a well made suspense thriller that doesn’t give away its suspense till the end. The movie goes on to prove that good writing, screen play and lesser know actors and above all a low budget movie can turn into a brilliant entertainer. my rating is 4.5/5. Highly recommended.

U Turn (Telugu/Tamil) Movie Review: It is nice that Pawan Kumar himself directed Telugu/Tamil versions of well made Kannada U Turn movie. This thriller focuses on traffic violations and how innocents have to pay the price due to negligence/recklessness of others. Any other writer/director would have altered the plot and made a mess out of it. The telugu version stays true to the original Kannada version.

Samantha is more effective in portraying fear, who is well supported by Aadhi Pinisetty and other supporting characters. Thrillers should be short and effective, which U turn is no doubt. The cinematography and music lift this movie. The flyover almost becomes the main character of the movie. One the best thing about this movie is the amount of detailing gone into the writing.

The word ‘Karma’ is repeated at the start of the movie and it becomes the theme of this movie. U turn is a well made thriller which you can watch as it is fairly engaging from start to finish. Also drives home a message on traffic violation. Take a U turn and go watch this movie. recommended. My Rating 3.5/5.

Imaikkaa Nodigal ( Meaning: Blinkless Seconds) Tamil Movie Review: Good things first, this one is fairly engaging thriller that has unpredictable plot twists and turns and wonderful character development. Especially, Anurag Kashyap and Nayantara’s character development is just amazing. Anurag has got a wonderful Kollywood debut with this movie and he almost steals the show. Just his smile is as menacing as it could be. Nayantara is very good as usual as the CBI officer. However, the surprise of the movie is Vijay Sethupathi. He makes most of the his available screen time. Atharvaa is good in action parts of the movie.

Now, coming to the minus points of the movie. The love story between Atharvaa and Rashi Khanna isn’t that exciting and it slows down this thriller which could have been better. Even the songs slows down the pace of the movie. Also this even makes the movie a bit long and tests your patience.

Anurag outshines as the menacing pyscho-killer, Rudra. The twist in the plot is Nayantara has already killed the Rudra. Now, who is this Rudra? You need to watch the movie to get all the answers. Recommended. My rating is 3.5/5

This movie is based on a popular legend “Nale Ba” of Bangalore and some parts Karnataka during the 1990’s. The myth goes “a witch roams the streets in the night and knocks the door. The witch apparently spoke in voices of your kin so you would be deceived to open the door. If you open it then you will die.” So the residents came up with a smart idea of writing ‘Nale Ba’ (means ‘come tomorrow’ in Kannada) outside the doors and the walls of their house. So when the ghost reads it and it goes back to come again the next day and the cycle repeats.

The movie is set in North India in a small town where Stree comes to stalk men during nights of the festive season of Navarathri. This one is an experimental movie Hindi as far as Horror/Comedy goes.  It has its funny as well as scary moments.

Rajkumar Rao does his best as usual. Shardha Kapoor as the mysterious girl is good too. The funniest character of the movie is Pankaj Tripati who owns a book shop, and he guides Vicky and his friends on how to cope up with the Stree and her haunting.

The movie reminded me well made Hindi horror movie Ek Thi Daayan. Also Hollywood movie The Woman in Black. Especially while watching the climax. Others have complained about the climax, but I felt that it was well suited for the movie.

The movie could have been a bit shorter to make it more presentable, as it feels lengthy and slow at times. Overall, it is a well made movie that could be enjoyed by everyone.

Go and enjoy it with your friends.